This January, Colonial Williamsburg will host the 22nd annual Working Wood in the 18th Century conference. It’s a three-and-a-half-day get-together where furniture makers and historians – professionals and amateurs alike – are treated to lecture-demonstrations from staff and renowned leaders in the field. Along with plenty of how-tos and historical analysis, many stories of the past emerge. While historians often coax stories from furniture about ownership and connoisseurship, another set of stories often gets left behind: those of the makers. The furniture itself can often tell us of how it came to be – the story of its making – and therefore the story of those who made it. In most cases, the furniture they made is all that remains of long-ago craftspeople.

Here in Colonial Williamsburg’s Anthony Hay cabinet shop, we are building a high chest of drawers for this year’s conference (learn more about the original in our collection here) Our process of studying and building this piece uncovers as much of its and its maker’s stories as possible. While we don’t know for certain who the maker was, various sources indicate that it was made in or around Winchester in Virginia’s Shenandoah Valley circa 1795.

Traditional ways of looking at objects help fill in some details of the story. The overall form is similar to work done by preceding generations of Philadelphia and Delaware River Valley craftspeople, although by the 1790s, the high chest on cabriole legs had all but disappeared from the vocabulary of fashion-conscious makers and buyers. Because immigrants who settled the Shenandoah Valley were often directly from Europe or established coastal cities, older forms and fashions often persisted in the region. This high chest shows how factors like time, distance, and exposure to new cultures impacted and transformed the old designs. For example, the swag molding that cuts across the tympanum (the uppermost, decorative section of the piece) is a particularly neo-classical addition that betrays its 1790s date of manufacture. The maker and the client had tastes both rooted deeply in yesterday’s fashion and an eye on present trends.


One peculiar feature of the high chest’s design has us wondering just how familiar its maker was with the form. Namely, the back legs – with their claw feet – point forward while we usually expect to see all feet pointing outward. There is some logic to this more natural design (the piece could potentially sit closer against a wall), but it sets up some unusual shaping in the knees. These back legs could reveal a maker who had a passing familiarity with high chests rather than a thorough training in their conventions. Time and distance from the source could have caused him to turn his toes inward. Then again, this could have been requested by the customer.


As we delve deeper into a piece, we unearth more about its making and its maker. Whenever we re-create an original in the Hay Shop, our goal is not an exact facsimile or (worse) a forgery. Instead, we aim to uncover as much of the original building process as possible in order to copy that process instead of the object itself. If we do this successfully, the end result should appear as though it was made by the same shop as the original – not as a copy, but as another one done the same way. This takes us closer to the experiences of period craftspeople as it brings our decision making in line with that of a maker rather than a copyist. To glean insight into the building process itself, we scour antiques for any tool marks that remain: layout lines, over-cuts with saws, and any other trace of the maker’s hand. There was no universally accepted way of working wood in the 18th century, so each piece shows us something different, unexpected or new.


Our analysis of the original high chest is still in progress, but it bears strong evidence that its designer was educated in the classical proportioning systems central to high style cabinetmaking of the period. While he may have been “wrong” about the back legs, we should not dismiss the maker as unlearned in basic design conventions. In addition to molding profiles drawn from Roman architecture, both the lower and upper sections of the high chest are flanked by classically derived quarter columns. On the upper case, the fluted column is cabled – the lower part of the flute features a convex bead or reed (see photo below). As an example of the maker’s training, the cables terminate at precisely one third of the column’s height, or exactly how writers of the period prescribed.


While the quarter columns may point to the maker’s education, they also reveal his frugality. The quarter column on one side of the lower case was carved right through a massive knot. To do this is both technically difficult and aesthetically disruptive. So why do it? Judging from a handful of other knots in prominent places, the maker was probably making the most of the material at hand. Despite the relative abundance of wood in the 18th century, the cost of fine-grained material was high.


That knot also shows us that the quarter column was carved directly out of the leg post while the column on the upper case was turned on a lathe and applied to the case afterwards. Here we have the same design element executed two different ways on one piece of furniture. The upper and lower cases are each different types of structures, and each method makes sense for its respective application. We won’t copy the knot in the column if we can avoid it, but we will follow his two methods for making them.

Throughout the piece, we find tool marks that point towards the method of manufacture as well as the order of operations. Highlighted in the images below are a few of the things we are studying.

This through-tenon joins a vertical drawer partition to the horizontal drawer blades above and below it. Not only is the joint’s size crystal clear, its presence reveals the order in which the cabinetmaker assembled the parts of the upper two tiers of drawers. The vertical partitions were joined to the horizontal ones and then that entire assembly was joined to the main structure.


The tenon that ties the tympanum to the vertical stiles is hidden from view, but the layout lines that marked its location ran long and remain visible at the top of the case. These reveal the tenon’s exact size.


Saw marks, chisel marks, and possibly plane or spokeshave marks atop the scroll pediment indicate the process used to create and refine its shape. Furthermore, they show how speed mattered more than perfection in this hidden section of the piece (this is the top surface of something eight feet off the floor).

Historians are uncertain about the identity of the shop master who oversaw the construction of this high chest. Even if we knew his identity, we would probably not know all the individuals in his shop. We do not know whose hands did what work or who made which decisions. We do, however, know the decisions that they made and the work that those hands did. All those knots, layout lines, and saw marks tell the story of these cabinetmakers in a language that we as cabinetmakers share. By doing the work the way we think they did it, we can recount their history in wood as well as in words.

Our annual conference allows us to tell these stories of cabinetmakers long gone. See our high chest — not a copy, but a brother to this studied antique — during our talk “Emigrated Elegance: A Shenandoah Valley High Chest of Drawers” on Friday morning of the conference. This is just one of many fascinating dives into our theme “Down the Great Wagon Road: Furnishing the Southern Backcountry.”

Consider joining us before spots run out. Register now.

Plus, are you a student or recently graduate from a program in woodworking? Get your registration covered with our Working Wood conference scholarships. Apply by this Friday, November 22. Learn more here. 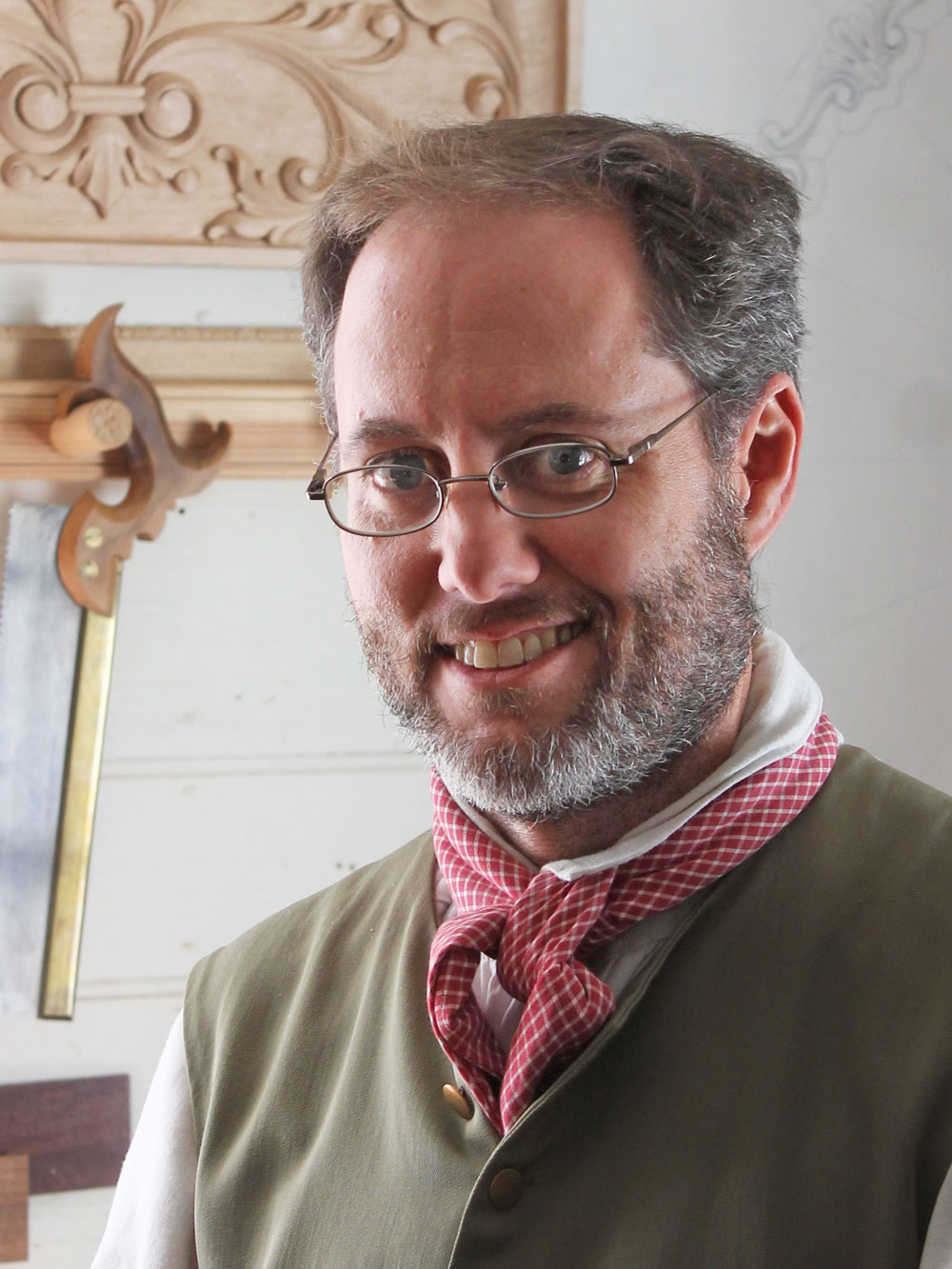 Bill Pavlak is the supervisor of the Hay Cabinet Shop at Colonial Williamsburg where he has worked since 2005. In addition to building, carving, and writing about furniture, Bill enjoys collecting sound recordings (especially vinyl records) and creating all kinds of things with his young son.