Who knew the collaborative reproduction of an 18th-century wig could bring such joy?

When Anne E. Bentley first saw the wig, she whispered in awe, “Is this it? My god! It’s gorgeous!”

For more than 40 years, she’d worked with the artifacts at the Massachusetts Historical Society, including a deteriorating 18th-century bagwig, which had been stored in, of all things, a coconut. Now, in standing in the Colonial Williamsburg Wig Shop, Bentley saw the wig reincarnated, as it would have graced Henry Bromfield’s head the first day he wore it.

For the firs time, Anne Bentley (right), the Curator of Art & Artifacts at the Massachusetts Historical Society, sees the reproduction bagwig created by Colonial Williamsburg wigmakers including Debbie Turpin (right).

This collaborative project with the Massachusetts Historical Society was the culmination of 145 hours of work by three women in the Colonial Williamsburg wig shop. It all began when Bentley, the Curator of Art & Artifacts at the Massachusetts Historical Society needed help interpreting a wig for an upcoming exhibition. Bentley was working with Kimberly Alexander, who was guest curating an exhibition called “Fashioning the New England Family,” which featured textiles and costumes from 1630s through 1896, and also happened to include a reproduction 18th-century petticoat made by the Foundation’s Janea Whitacre, Christine Johnson, Rebecca Starkins, and Sarah Woodyard.

Bentley and Alexander wanted to include the wig in the exhibition. The owner of the wig, Henry Bromfield, was born in Boston and conducted business there as well as in London as a merchant. Before the revolution, he returned to Massachusetts, where he lived for more than fifty years, respected and loved by all who knew him. He died at the advanced age of 92 years, said to be the last Bostonian to cling to 18th-century fashions.

And his wig had to be displayed. But the curators didn’t know how to describe it, so Bentley contacted Erik Goldstein, Colonial Williamsburg’s Curator of Mechanical Arts and Numistatics. Goldstein suggested she contact Betty Myers, Master Wigmaker. Myers was thrilled.

After speaking with Bentley, Myers suggested a Shop trip to Boston to examine the wig and help identify its construction and advise on its care.

“It is our goal is to document and record all 17th- and 18th-century wigs that still exist,” says Myers. “I proposed that if we could examine the wig, we would make two reproductions. One would be for their use and the other for our collection.”

So that’s what they did.

Over 200 years old, the wig had seen better days, but they pooled their experience and studied every detail of the artifact in order to create a preproduction of what the wig would have look like new.

Henry Bromfield’s wig was a “bagwig,” meaning the tail or queue was enclosed in a bag of black satin or silk called a “bourse,” bag, purse, or crapaud. The open end of the bag was enclosed around the top of the queue by a drawstring that was concealed beneath a stiff black decorative bow. For casual wear, a man might wear the wig in a braid with a decorative bow and without the bag. However, placing the bag over the queue would be considered more formal attire. 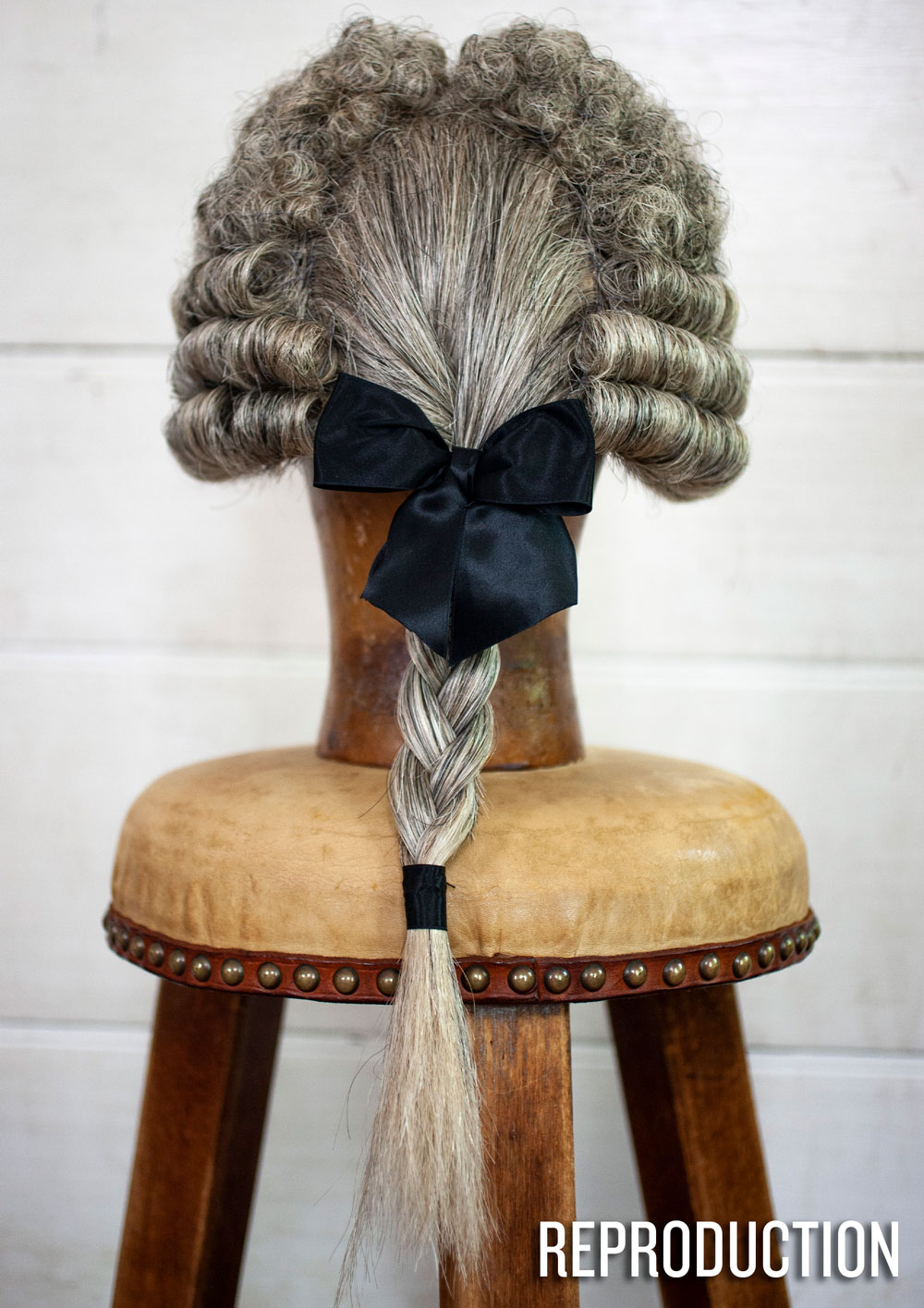 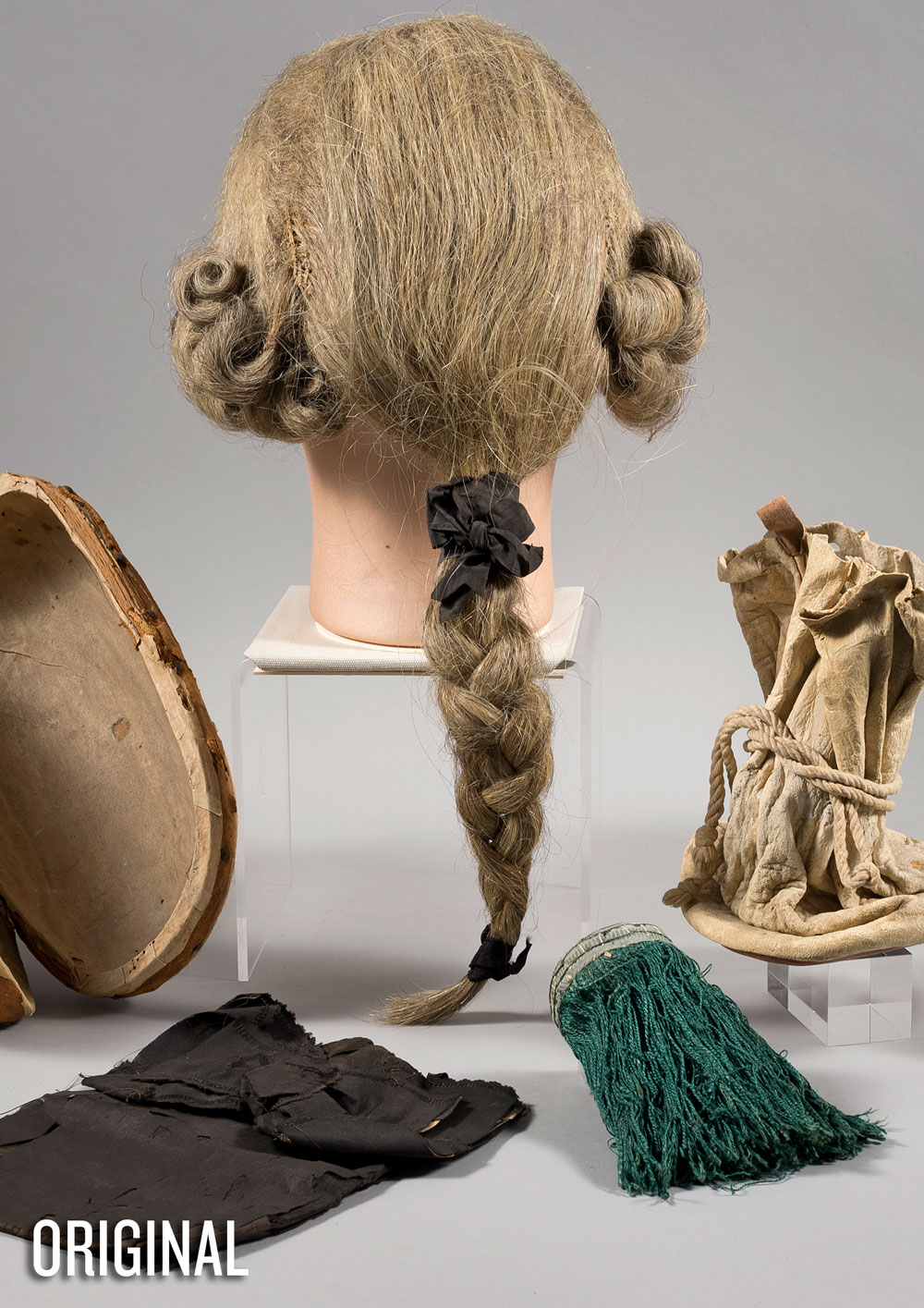 The women completed the Bromfield wig’s first reproduction using 18th-century techniques. The wig will be used alongside the original for teaching purposes at the Massachusetts Historical Society. The 145 hours of work was divided among many processes including purchasing the hair, boiling and frizzing the hair, hand-knotting the caul, constructing the base, stitching hair to the base and styling the hair into its final structure. Here are a few of those steps highlighted:

The wigmakers used horse hair, which comprised the majority of the original. In the 18th century, horse hair was generally imported from China. The women began by finding gray horse hair (as the original was), which represents that he was of a man in business. “In fact,” says Myers “We see the term ‘grizzled’ used for gray in account records of the period.”

Next, apprentice Palmer and Myers wrapped small sections of horse hair around clay pipes, tied it off with string, and boiled them to create the curls. Palmer experimented with the boiling point and found that 45 minutes produced the perfect look without yellowing the dye. Out of the pot and off the pipe, the hair holds its curl for teasing or styling.

Then the wigmakers weave the hair onto silk, using a variety of patterns depending on the length of hair and the desired effect. 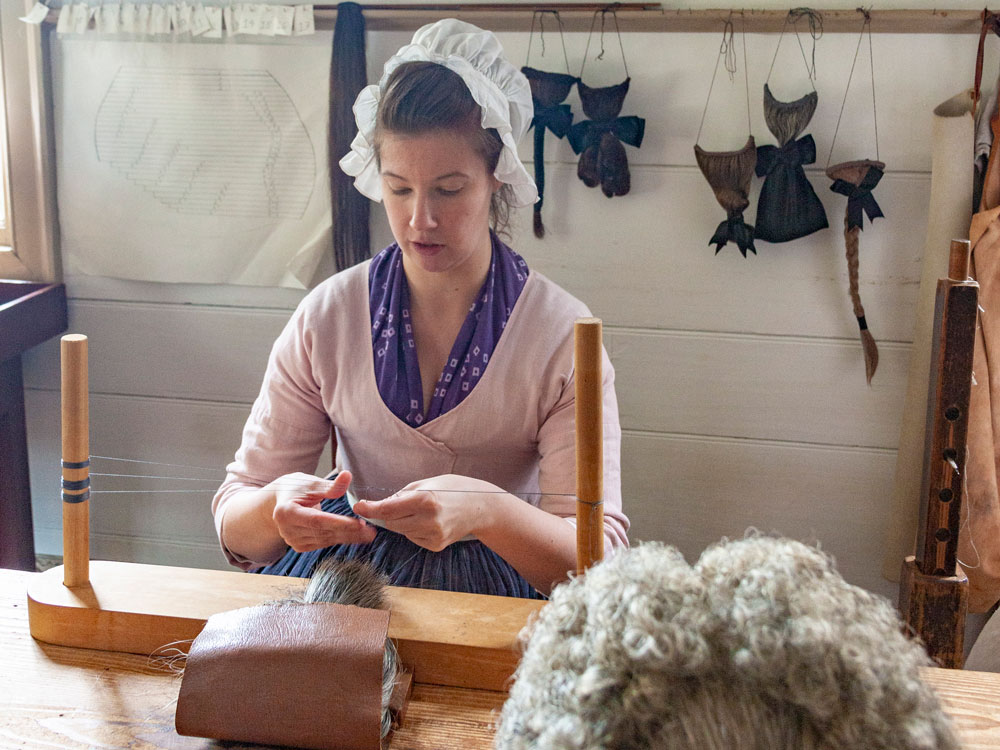 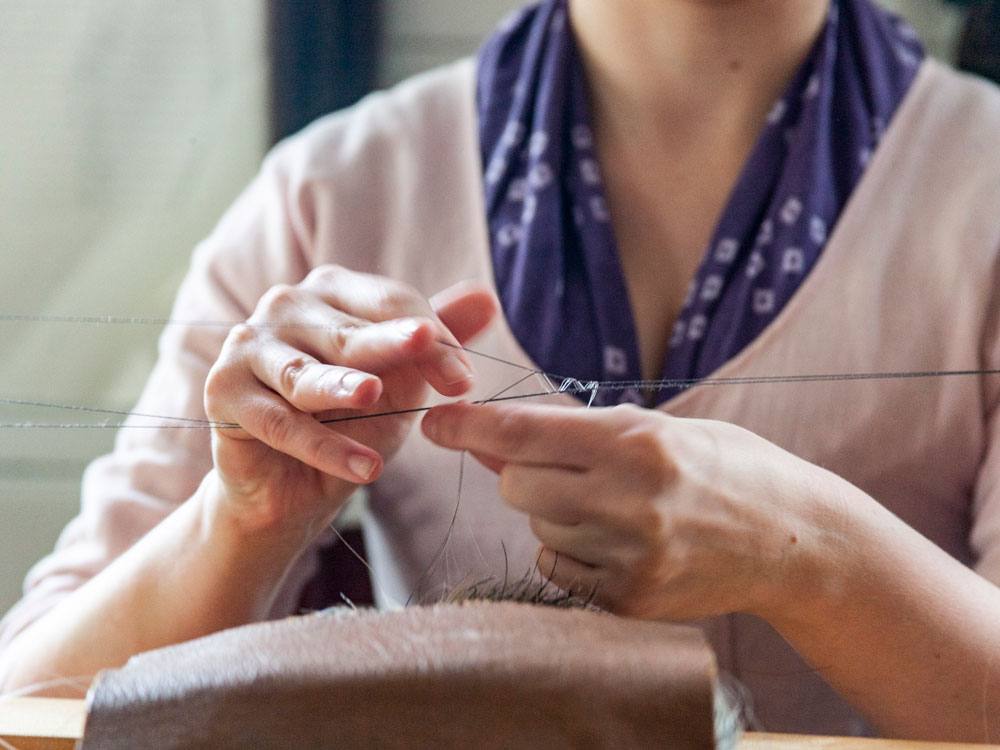 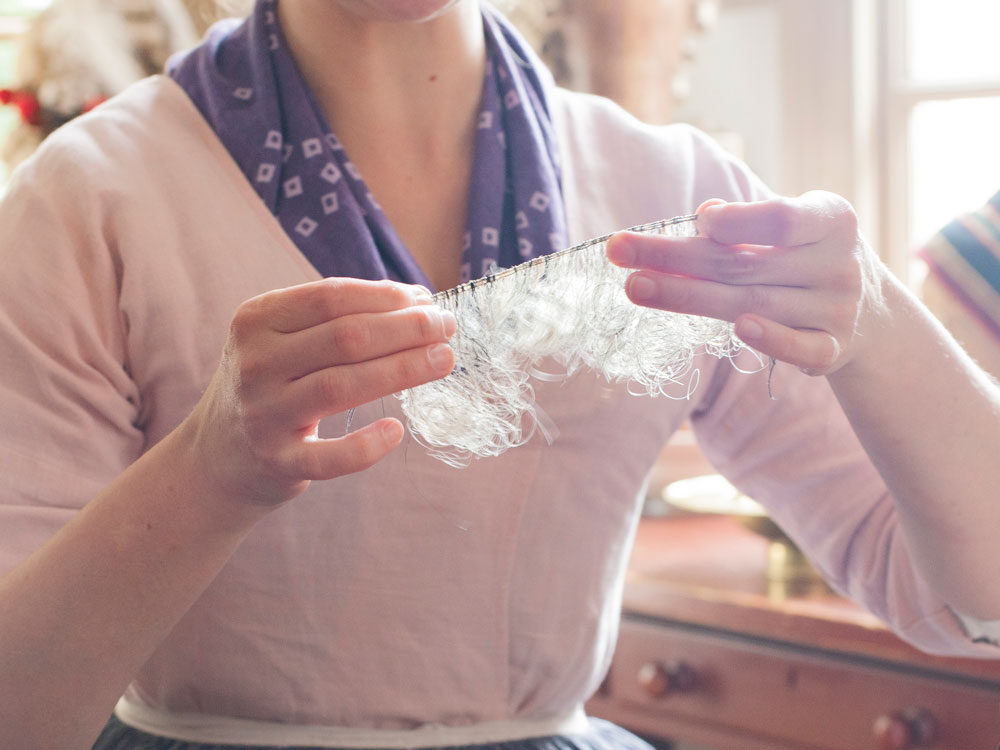 Simultaneously, Turpin worked on hand-knotting the linen caul or base of the wig in a circular pattern to replicate the Bromfield caul. Forty-five hours of the production time was consumed by the hand knotting.

“It’s therapeutic after a while,” says Turpin. “You start to get into a rhythm.”

Myers constructed the Caul with an outline tape made of silk to match the one in the original. It was called “Ointment Pink” due to the pink color, which Myers learned from conservators while studying 18th-century wigs in London and Germany. Brown linen reinforced the netting to extend the life of the wig.

Then, they stitched the woven hair onto the caul and styled it into the final product.

“This is a labor of love and we really appreciate it,” Bentley said as the wigmakers demonstrated the techniques they used to construct the reproduction, saying that this collaboration has allowed her to interpret their wig for guests, and that comparing the reproduction with the original will be a hit as an educational tool.

“It was such a joy to work with all of our skilled colleagues in the Colonial Williamsburg Foundation Historic Trades,” says Bentley. “And forging new friendships is the cherry on the cake!”

Note: Myers, Turpin, and Palmer would like to acknowledge that Regina Blizzard graciously took on a majority of the daily maintenance so they could concentrate on this reproduction.

Want to meet the wigmakers and learn more about our world-class tradespeople? Use the itinerary below to plan your next visit:

See the time before power tools and meet our world-class artisans in the Historic Trades. Must see for DIY and makers of all ages!