Man in the Making

If you asked me 10 years ago if I could imagine myself portraying George Washington, I would have laughed.

Fast forward to the present…I sometimes laugh at myself.

I have the humbling honor and daunting challenge of portraying George Washington at Colonial Williamsburg. First President. General of the Continental Army. Leader of the Revolution. Hero. Icon.

Yet, before he became those things, before he ascended to semi-mythic status, he was a young person.

That is my task; to bring young George Washington to life. The vital question is how?

As I have explored Washington as a young man through his letters, diaries, and comments about him, I have seen the person behind the public face. The humanity behind the icon. The man in the making.

He was like any young person. He struggled with people’s perception of him, always seeking to ensure that he presented the best possible version himself. He reacted with concern, contrition, directness, and — at times —frustration. When he held firmly to a belief, he fought for it. He showed tenacity. At times, he also showed an awareness that he did not know everything, and that some responsibilities were beyond his experience and ability. He took those on anyway.

He rejoiced in friendship and he struggled with loneliness. He championed his perspectives and he experienced regret. He had moments of elation and triumph, and others of grief and failure. He handled situations with tact. Then he put both feet firmly in his mouth.

Human behavior has not changed much in the past 200 or so years. People are still people. Of course, society and culture have shifted, as they always do. People’s perceptions and reactions to circumstances have changed. Ideas, beliefs, and convictions come and go. But at its core, basic behavior, emotional response, and the human experience remain the same.

Every person, regardless of class, race, or creed, has to grow up. We all have experienced, in some small measure, the growing pains of life. Washington was no different.

These past six months of research have highlighted one incredibly important discovery: that I’m not that different from George Washington. Our personalities may be different. Our experiences, choices, joys, and sorrows are most certainly not the same. Our culture is dissimilar. But, I know what it is like to grow up, to hope to make something of myself, to lose friends, to have dreams and aspirations, and to hold to fast to ideals. Washington did too.

Now, think about this: those descriptors are merely titles. Our jobs do not make us who we are.

It is our reactions to our experiences that form us — why we do what we do, what personality traits we exhibit, how we respond to situations.

George Washington was no different.

The beauty of this truth is that we can learn from him. We can observe his successes and failures, and apply them to our lives. How can we be better people? Better citizens? Better leaders? Better encouragers? How did Washington better himself? Why did he respond to situations in his life the way that he did? What can we do differently, or perhaps, what can we do that is the same?

We have the benefit of hindsight.

I hope you will join me and my fellow Nation Builder interpreters as we explore these questions and connect to the people that walked the streets of Colonial Williamsburg as the ideas that shaped this nation were evolving. When you see me, say “Good Day,” and perhaps, together, we can figure out how George Washington became an icon, why he made certain decisions, and more importantly, what shaped him as a person. Then, just maybe, we can find and learn from similarities in ourselves, and affect our world.

Washington led a fascinating life before he was immortalized in marble. Together, let’s discover the man still finding himself, the man who would, perhaps, even laugh at himself to realize what he was becoming. The man in the making. 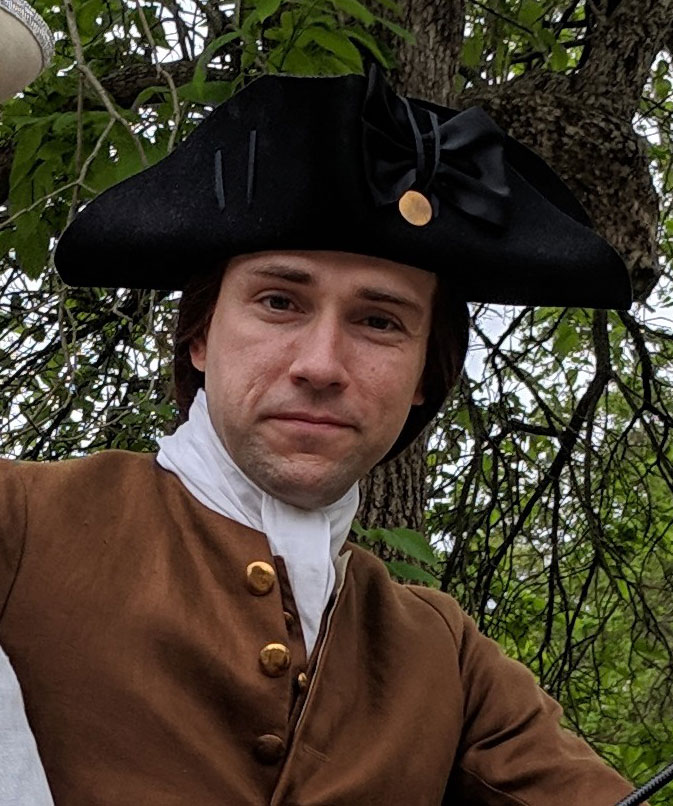 Daniel Cross returned to Colonial Williamsburg in October 2018 to take on the role of young Washington. He has been interpreting history off and on since he was 10, has worked in education, and has experience in various forms of performance.