Our shoemakers would like to clear up a few things. Typically, when our historic tradespeople are speaking with guests, they’re sharing new information about crafts the master, journeymen and apprentice craftspeople are keeping alive that the average person has only a passing familiarity with.

Shoes are different. We all wear them, and we’ve absorbed facts and anecdotes mixed with assumptions and tall tales. Here are a few myths we’d like to squash:

Many imagine the shoemaker—like Geppetto—working alone in the quiet of a small workshop, lovingly crafting each pair of shoes from toe to heel. Some of our favorite childhood stories, like Pinocchio or The Elves and the Shoemaker, reinforce this image. In the 18th century such a fanciful workman would be out of business before he got his first pair finished.

A typical Virginia shop might have anywhere from half a dozen to twenty-odd shoemakers—one in 18th-century London employed 160. The centuries-old division of labor had the master of the shop cutting the leather parts, the “closer” sewing the pieces (the uppers) together, and then the crew of journeyman putting all of these readied parts together, maybe at the pace of one pair in a twelve-hour workday for each journeyman. Together, they would knock out dozens of pairs a week, but none were working on a single shoe at a time. 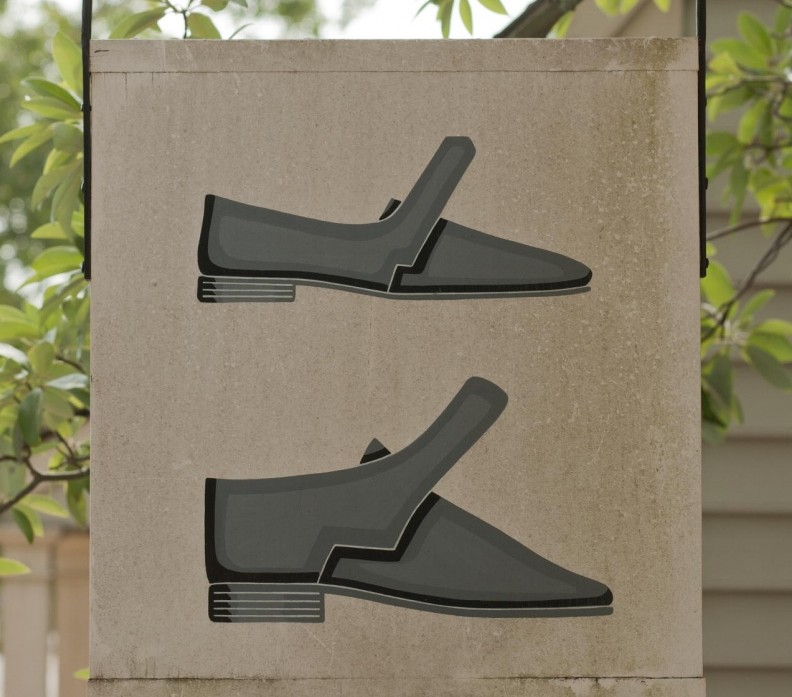 We know of at least a dozen shops manufacturing shoes at the same time in Williamsburg in the 1770s, and even more in larger cities (800 firms in London). It was a leading industry into the 20th century.

18th-century shoemakers were neither “simple” nor technically even “cobblers”. But the phrase still echoes in some heads, perhaps thanks to the 1970s musical, “1776.”

In one memorable scene, the members of the committee appointed to write the Declaration of Independence demur from the task one after the other. When it comes to Roger Sherman, the character expresses his reluctance in song:

Mr. Adams, but, Mr. Adams
I cannot write with any style or proper etiquette
I don’t know a participle from a predicate
I am just a simple cobbler from Connecticut

Sherman was, in fact, a skilled shoemaker, who probably would have punched you if you dared called him a cobbler. For centuries before, cobblers were relegated to mending old shoes using old leather, rather than making them. Over time Americans have gotten a little sloppy with the terms, and they are often used incorrectly, or, by the late 19th century, conflated.

As for “simple,” shoemakers were far from uneducated. Sherman is just one example, but shoemaking was historically a very literate trade, witness Hans Sachs, “The Nightingale of the Reformation,” Samuel Lane, a New Hampshire shoemaker whose library of over 300 books would put many to shame, and many others, including a disproportionate number of published poets compared with other trades.

So you can see why a shoemaker wouldn’t want to be equated with a “clumsy or bungling workman” (that is, a cobbler). Who would you rather have making your shoes?

Shoes were no more or less a luxury item than they are today. Everyone wore them, needed them, most bought four pair a year, and the variety of prices and qualities was comparable to what you see today. There was a huge market for reconditioned secondhand shoes from London on the cheap end. But if you had too much money, or just the desire to be a fashionista, they could also be quite expensive.

Like today, a custom-made item could be more exquisite, which made it more expensive, therefore putting it beyond some people’s price range—it was all about consumer choices, then as now. Buying on credit was big in 18th-century Virginia, and people bought plenty of things they couldn’t afford, just like we do today.

Typically a pair might cost from half a crown to over a pound, two pounds for riding boots. The median shoe price in Virginia was five shillings sixpence, which equates to just less than an average day’s wages for the journeymen working for George Wilson’s shop on piece-wages, not hourly/salary, potentially 80-90 Pounds Virginia money annually.

The takeawak? Few Williamsburgers needed to spend more than a day’s wages for any one of the four pair of shoes a year they bought because of the wide price range available, but some were frugal, others not.

MYTH #4 ALL SHOES WERE CUSTOM-MADE

Retail and wholesale ready-made shoes, not custom-made footwear, had been driving the shoe industry for centuries by the 1770s, even before it was mechanized. Machines didn’t become part of the process until the 1860s-80s.

Shoes were big business. The American colonies imported some 300,000 pairs a year from London. One Londoner held a series of annual licenses to export “400,000 dozen” shoes a year!

Any shoemaker would go out of business sitting around and waiting for the next, ahem, well-heeled customer to come in and place a custom order, so he stocked his shop with “Sale Shoes”, the most popular styles ready-made in the most common sizes.

When Wilson’s Williamsburg shop was burglarized in March of 1774, 19 or 20 pairs were stolen, probably all the lone thief could manage to carry rather than his entire inventory.

Perhaps feeding off the myth that 18th-century shoes were all custom-made, or the clever marketing of today’s leading “bespoke” (custom) shoemakers, who still do some hand-sewing, some boldly charging north of $8,000(!) a pair, is that a single cherished pair must have lasted a lifetime and was all you needed.

Today hand-sewn shoes are a luxury—in the 1770s that was simply the way all shoes were made.

But by the 1750s, in Virginia just like England, most people bought about four pairs of shoes a year. Like today, you needed to have footwear suitable for a variety of purposes. 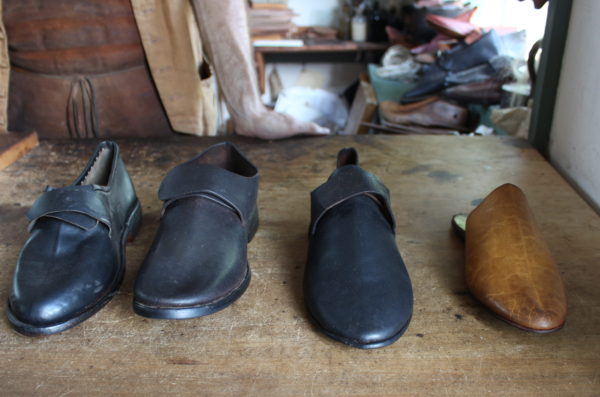 At any given time, the average person might own one or two pairs of common shoes for everyday use, slippers for indoors, and dress shoes for church and other more formal occasions. And dancing pumps were no huge luxury either.

Riding boots would have been a luxury item, like a horse to wear under them. Of course, wealthier folks had more cash (or credit) and might have owned a wider assortment of shoes.

Orphans and residents of the Williamsburg poorhouse were issued two pairs a year. So were slaves, apprentices, and soldiers. In a city like Williamsburg, barefootedness was hardly an option. People knew that you could contract worms walking barefoot, and Duke of Gloucester Street was, after all, “a mile long, 100 feet wide, and a foot deep.”

So, OK if the shoes didn’t last forever, they must have actually been terrible, right? How comfortable could hard leather be compared to the modern comfort of our overly-padded high-tech sneakers?

Pretty comfortable, actually. All-leather shoes are so rarely worn today that few people even know how nice they can be. The assumption that “new” is better leads too often to the conclusion that old ways are bad. But synthetic footwear is hot, doesn’t breathe, and never fully conforms to your foot—and let’s not even mention sloppy fitting. Heavily-padded, over-supportive modern footwear actually robs your feet of natural momentum by absorbing too much energy, thus fatiguing your muscles and, research suggests, contributing to the increasing number of degenerative joint injuries.

The natural oak-bark-tanned 18th-century leather quickly conforms to the shape of a foot, even becoming a natural “footbed” — better than any slip-in orthotic insole that merely floats loose inside a shoe that’s too big to begin with, says our shoemakers.

A final widespread misconception, seemingly at odds with the notion that shoes were anything like comfortable, is that both shoes were the same shape for both feet, because “right and left were not invented yet.”

Most 18th-century shoes were indeed made from the same pattern because it was cheaper and quicker, but once the wearer attached their shoe buckles and wore them, the shoes quickly formed to that foot and the matter was settled. Many also cut off the under-strap, permanently assigning the shoe to buckle only on one foot.

A related myth is that shoes were interchangeable by design, allowing people to swap left and right daily, like rotating car tires, to make them last longer.

But the best 18th-century book written for shoemakers warns us that switching back and forth ruined the shoes rather than prolonging their life, and the feet were constantly pained especially when the shoes were new. Imagine wearing the wrong shoe on the wrong foot every day!

The archaeological record confirms that only a handful of about 5,000 surviving period shoes from the region show any evidence of swapping.

So there you have it. Myths busted.

Visit the shoemaker and check out our itinerary for DIYers and Makers to learn more about #AmericasFirstMakers aka our historic tradespeople.

Check out special demonstrations with the best craftspeople in the world in our historic trade shops this fall.